I am anxiously awaiting the arrival of my first child: Ezra Neal Hicks.

As I am waiting I wrote this poem reflecting on the meaning of Ezra’s name in Hebrew. Ezra means, “helper.” Here I have played on that meaning and borrowed heavily from biblical language.

Poetry is about encounter and impression. So read it first. Then read the discussion that follows. See what you picked up on. Tell me what I didn’t pick up on in the comments. 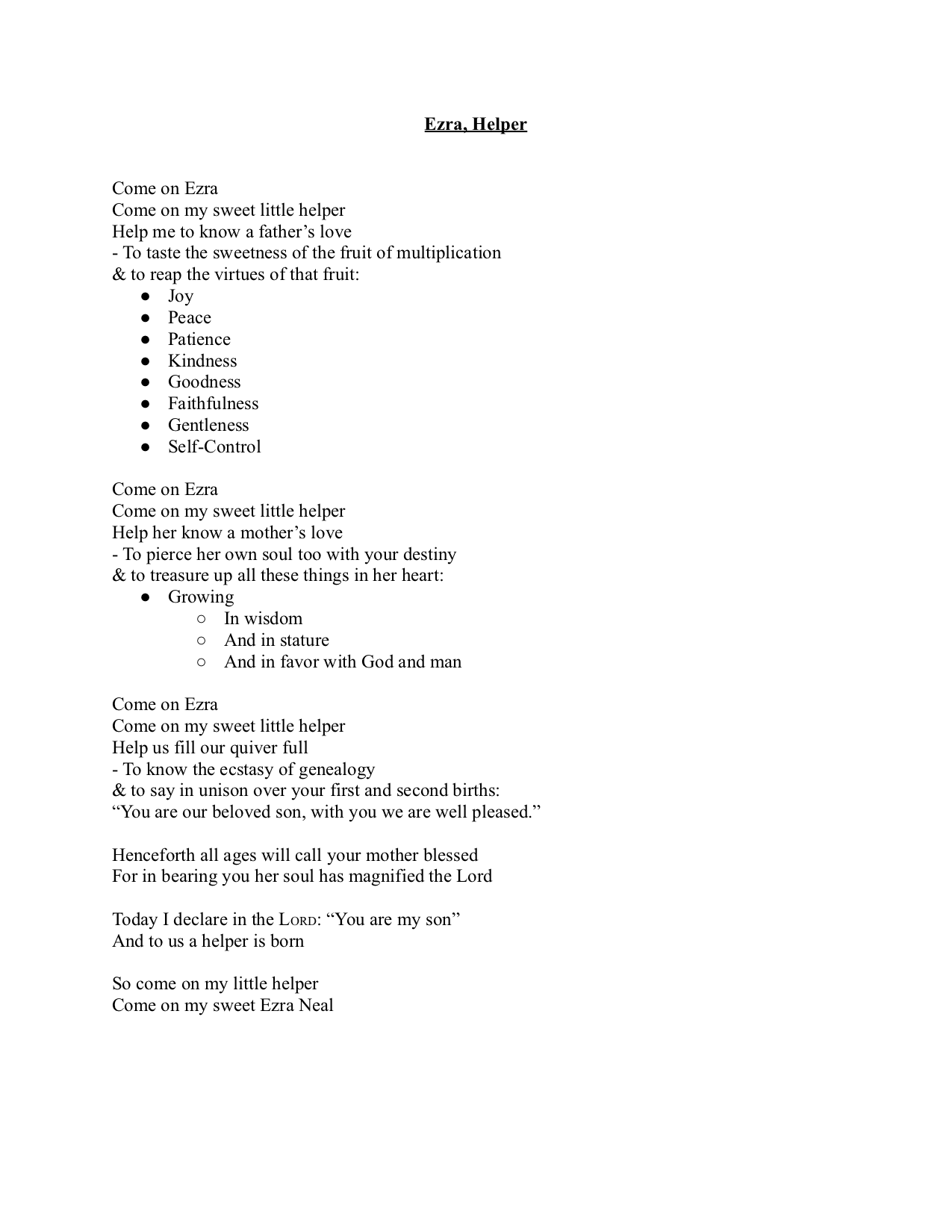 The poem is a meditation on what it is I believe Ezra will “help” my wife and I to do as new parents.

The refrain, “Come on Ezra, Come on my sweet little helper.” Is an expression of my longing to be united with my son and to learn the lessons he will teach me and receive the help he will give me. I think it is also an important turn on the usual idea of a “helper.” Usually, a “helper” is portrayed as someone strong and much bigger than the one receiving help. Here we are reminded not to despise someone because of their youth (1 Tim. 4:12). Little Ezra will learn much from us and our families, but he will also teach us much. We will all help him, but he will also help us. In fact, God delights in teaching us from the small and unassuming things of this universe – the things that are foolish to the world (1 Cor. 1:27).

That I am asking Ezra in the first stanza to “help me understand a Father’s love” is an important key to what I intended by this whole poem. In essence, I see the love shared between parent and child as a microcosm of the love shared from eternity between Father and Son. Just as Paul says that a husband and wife are a microcosm of the love between Christ and the Church so also are parents and children a microcosm of the love between the Father and the Son. This is explained in illustration by evoking another Biblical metaphor: fruitfulness. Clearly this is a reference to Genesis’s creation mandate to be fruitful and multiply (Gen. 1:28). I connect here this image of children as fruitfulness to the fruit of the Spirit that Paul lists in Galatians 5:22-23. The fruit of the womb helps to beget the fruit of the Spirit.

The second stanza focuses upon my wife, Hannah. Hannah in Hebrew means “gracious gift.” But the imagery I drew on for this section is not the image of the Biblical Hannah (at least not directly). I also never mention Hannah’s name in this poem. This is another purposeful rhetorical device. The focus of the poem is on the meaning of Ezra’s name so I tried not to clutter it with any direct mention of other names. The imagery here does indirectly play on the meaning of Hannah’s name, however, by evoking the Biblical language used to describe Mary, the mother of Jesus. Mary is presented in Luke’s Gospel with important echoes of OT scripture. One of the important connections drawn by Luke’s careful language and style is a connection between Hannah, the mother of Samuel, and Mary, the Mother of Jesus. This works on multiple levels. Beyond the connection between the Biblical Hannah and the Biblical Mary, my wife is young just as both these ladies were when they bore children. In Luke 2:33-35 the prophet Simeon prophecies over the baby Jesus and over Mary telling her that he will cause “the falling and rising of many in Israel…. so that the inner thoughts of many will be revealed – and a sword will pierce your own soul too.” By growing up beyond their dependance as infants children will of course pierce the soul of their mother. Further, parents will be forced to reflect on their own hearts by raising children and thus the growth of the child demands the uncomfortable prick of growth – the piercing of soul. I would think mothers would know this more than anyone. And despite this reality mothers will do just as Mary did. Mary looked at the tough realities of raising a child and she “treasured all these things in her heart” (Luke 2:51). And as Mary treasures these things in her heart – no doubt also be pricked in soul – “Jesus increased in wisdom and in stature, and in favor with God and man” (Luke 2:52).

The third stanza brings together both parents as a collective. The reference to Ezra “helping us fill our quiver full” is a pregnant allusion to Psalm 127:3-5:

3 Sons are indeed a heritage from the Lord,
the fruit of the womb a reward.
4 Like arrows in the hand of a warrior
are the sons of one’s youth.
5 Happy is the man who has
his quiver full of them.
He shall not be put to shame
when he speaks with his enemies in the gate.

The reference to taking “ecstasy in genealogy” is a meditation upon the Bible’s frequent use of genealogy. Of course, the connection between frequent genealogies and the command to be fruitful and multiply cannot be overlooked, but also I think there is a certain delight to be taken in the particularity of being a link in a larger chain of a family. I am the father who “beget” Ezra and Ezra will perhaps “beget” children to us one day. I think also of my wife’s parents who are first time grandparents who are surely ecstatic in the new link in their genealogical tree. It is thus precisely from this place of blessedness from a full quiver of arrows and ecstasy in genealogy that we may dare to speak over Ezra a pronouncement of “You are our beloved son, with you we are well pleased.” Of course, the mention of pronouncing this over Ezra’s “first and second births” refers first to his physical birth from Hannah and second to his eventual baptism and confirmation into the Church. May we seek to pour back out the blessing we have received from God by blessing this child through raising him to love and know and serve the Lord Christ. After all, it is because of the Lord Christ that Ezra shall be called a beloved son.

The final stanza is a reference back to both of the first two stanzas. The reference to Hannah being henceforth called “blessed” and her soul “magnifying” the Lord because of Ezra’s birth is a reference to Mary’s song in Luke 1:46-56. Also the reference “to us a helper is born” is a play on the traditional Christmas formula from Isaiah 9:6: “For unto us a child is born…” The reference to declaring in the Lord that Ezra is my son harkens back to the plea for an experience of the love of God the Father in the first stanza and is an echo of Psalm 2:7-8 where the Davidic king is adopted as God’s son.

Books That Have Greatly Impacted Me

The Mysticism of Mathematics