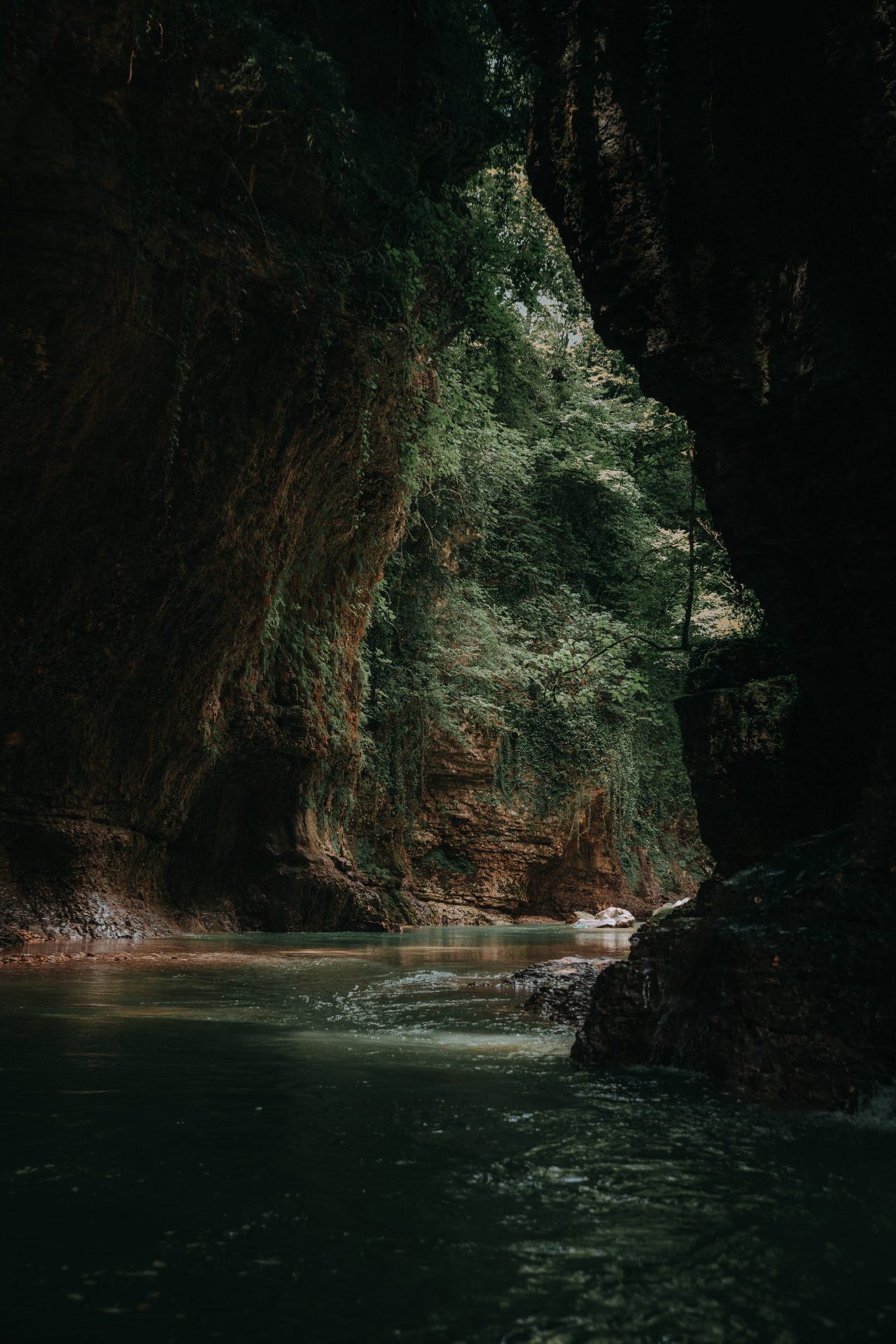 for Christ plays in ten thousand places, lovely in limbs, and lovely in eyes not his To the Father through the features of men’s faces – Gerald Manley Hopkins

I have just recently graduated from Dave Ramsey’s Financial Peace University at my church. In this program one of the characters who presents alongside Ramsey and his Daughter is Chris Hogan. He wrote a book with an intriguing title that is mentioned frequently in the course: Everyday Millionaires: How Ordinary People Built Extraordinary Wealth – And How You Can Too. It is on my amazon wish list currently if anyone feels led to buy it for me! But the idea is intriguing just one the face of it: building wealth is not a secret only learned by the privileged and elite. It is available for nearly anyone on nearly any income level who is willing to live by Ramsey’s famous dictum: “Live like no one else today, and you can live and give like no one else tomorrow.”

As a pastor, I see many people who think that the deep spiritual people they see around them are just gifted with a little something extra that enables them to be that spiritual. Honest confession: I have thought this myself at times. Why does he seem so calm and centered amidst such stress and pain? How much does she pray? Is that possible for someone who’s not retired? I am becoming convinced more and more that these doubts about our own ability to live into the fulness of a vibrant spiritual life is a lie of the enemy. Ramsey and Hogan have convinced us that we can be “everyday millionaires.” I want to convince you that we can become “everyday mystics.”

Practice the Presence – The “practice of the presence of God” is a book by book by that name. The book comes from wisdom from a certain Brother Lawrence who was a lay brother in a Carmelite monastery in Paris. He was so attuned to the presence of God in his daily chores such as cooking in the kitchen and doing dishes that the monks came to learn from him. He taught them about his practice of always being in communion with God regardless of what he was doing.

Many others have further developed Brother Lawrence’s original idea. The recent publication Every Moment Holy (EMH) by Douglas Kaine McKelvey is surely an outgrowth of this practice. He offers liturgies for extremely normal occasions such as doing laundry, changing diapers, drinking coffee, reading a book, and paying bills. He also has a section at the end titled “For Practicing the Presence of God.” In this section he has brief prayers that can easily be memorized for the purpose of practicing the presence. Among the prayers offered are upon seeing a beautiful person, upon tasting pleasurable food, and upon hearing birdsong. A favorite of mine that I try to use regularly is Upon feeling the pleasance of a warm shower:

Thank you, O Lord, for gifts of water and warmth, and for the cleansing and comfort you offer both body and soul.

EMH has a mobile app with some free liturgies on it and the others for quick purchase. They also have a good website. I’d recommend the pocket edition physical copy. The full sized physical copy is a beautiful volume if you are interested in having it more fashionable than functional. I wrote my own little prayer for practicing the presence of God called, “Mundane Monkhood.” Feel free to use it if you see fit: 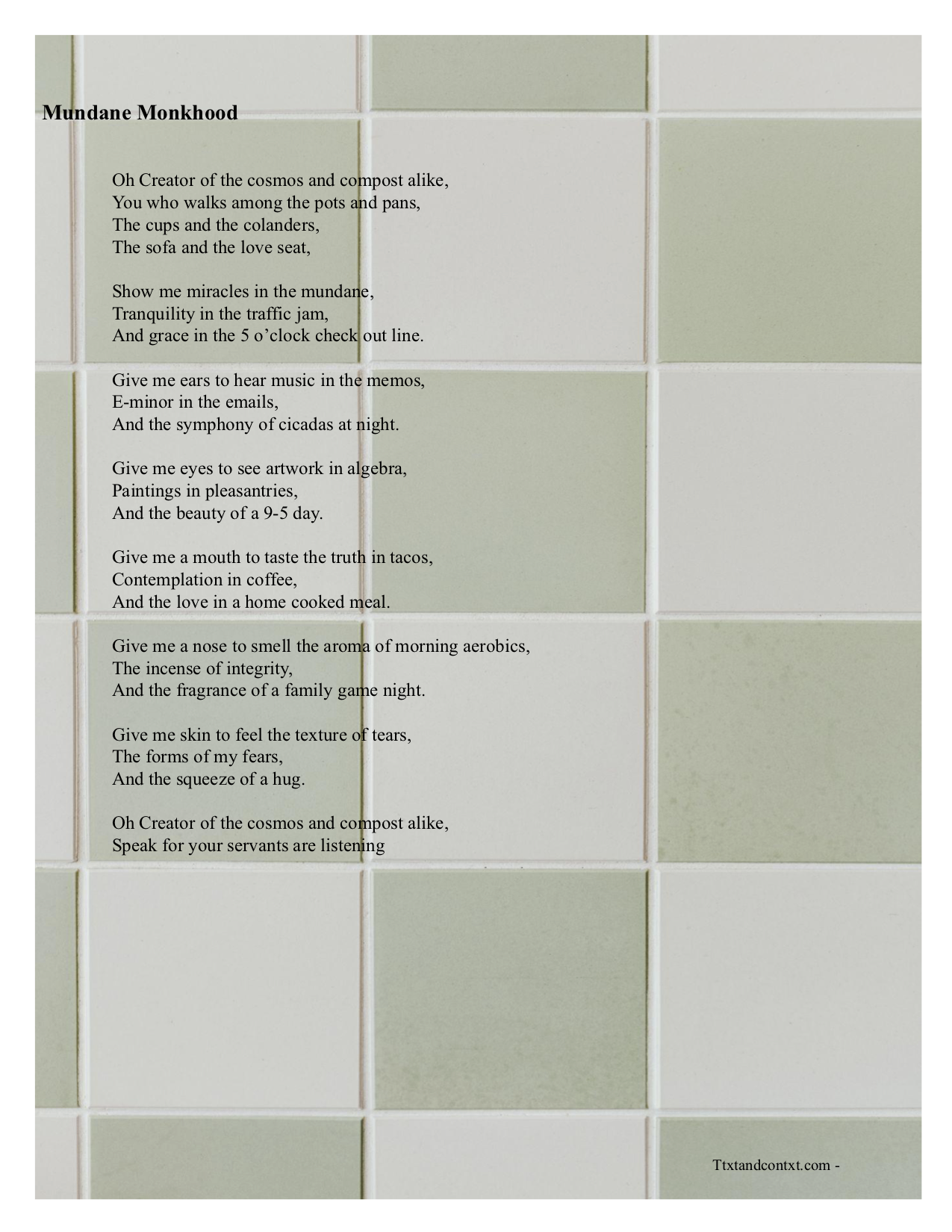 Do Nothing (Solitude) – Cal Newport in his recent book Digital Minimalism speaks of the importance of spending time alone. He says we as a culture in the Western world are suffering from “solitude deprivation.” Newport defines solitude deprivation as “a state in which you spend close to zero time alone with your own thoughts and free from input from other minds” (Pg. 103). He quotes Blaise Pascal on the impact of solitude: “All of humanity’s problems stem from man’s inability to sit quietly in a room alone.” He offers three practices to help one begin to practice solitude:

I found an intriguing little book when casually exploring a little shop in Charlotte, NC. The book is called The Lost Art of Doing Nothing: How the Dutch Unwind With Niksen. Niksen is “suddenly, in an unguarded moment, having nothing to do and not finding something new to do.” It is just being. It is a meditative and contemplative nothing. I would say it’s like when I used to go out on the back porch and find my Papa sitting in his porch swing. I’d say, “Papa, whatcha doing?” And he would say, “Oh, nothing.” It’s like that. Older generations are much better at solitude, Niksen, and just plain old-fashioned doing nothin’.

Christians are no strangers to the importance of solitude. This is a classic spiritual discipline in the Christian mystic tradition. As Wendell Berry has said, “we enter solitude, in which also we lose loneliness.” As believers we know that when we are doing nothing we are not actually doing nothing. We are just letting go and just being. For me, I like to imitate the practice of my Papa. I sit on my back porch in my rocking chair and just “do nothing.” I just think and be and have no agenda. I leave my phone inside. I bring my journal and sometimes I jot down a few random things that come to mind, but if you walked up and asked me what I was doing I could honestly answer, “Oh, nothing.”

If you are interested in trying this practice I have a few suggested ways to get started: 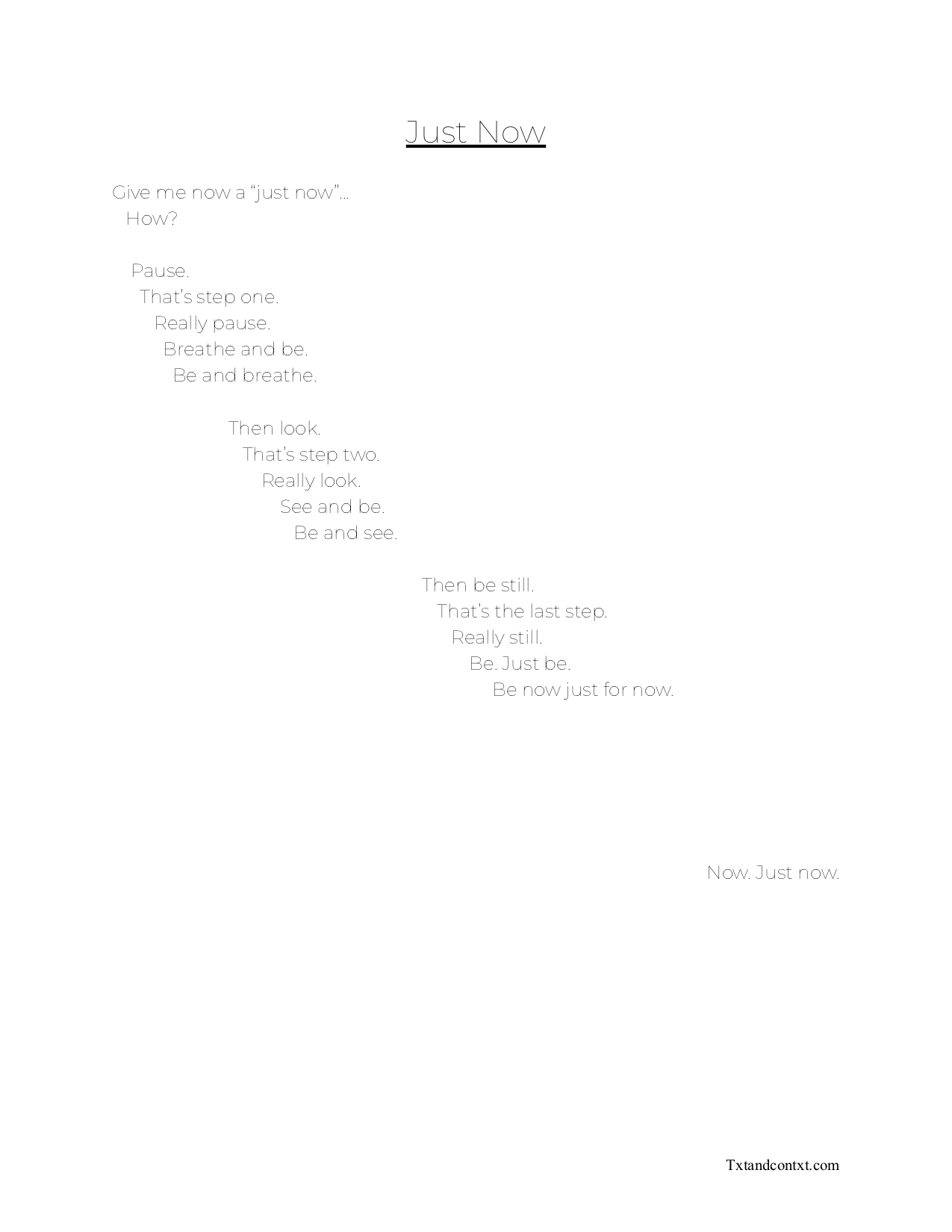 Read the Mystics – There are some great books out there that are written by people who are mystics. One of the best ways to lean into mysticism is to read mystics. Spend time with people who are mystical and you will start to become mystical. Here is a short (by no means exhaustive) list of reads to get you started:

Embrace Intellectual Humility – The three hardest words in the english language to utter are, “I don’t know.” The title of Pete Enn’s book sums it up: The Sin of Certainty: Why God Desires Our Trust More Than Our “Correct” Beliefs. God does not desire our intellectual consent to the checklist of theological perfectionism. He desires us. I would venture to argue that God is more pleased with the genuine loving heart of a heretic than the arrogant and idolatrous heart of a perfectly orthodox person. Don’t get me wrong. I’m a theology nerd. I’m a Bible nerd. I’m a doctrine-articulating, liturgy-loving, sit-on-the-front-row-of-class NERD! Nevertheless, to quote the apostle Paul, “if I speak in the tongues of mortals and of angels, but do not have love, I am a noisy gong or a clanging cymbal” (1 Cor. 13:1).

Speaking of Paul, his most beautiful and eloquent letter illustrates this too: Romans. Romans is a 16 chapter long magnum opus of theology. It is the pinnacle of Paul’s writings and his longest sustained argument. But at the very end of all his articulation of doctrine and all his detailed exegesis he basically says, “Yeah, I have no idea. God does and that’s good enough for me.” Of course he says it better himself:

33 O the depth of the riches and wisdom and knowledge of God! How unsearchable are his judgments and how inscrutable his ways!

34 “For who has known the mind of the Lord?
Or who has been his counselor?”
35 “Or who has given a gift to him,
to receive a gift in return?”

A few years ago I wrote this to remind me that I am NOT God:

What I’m trying to say is this: the I AM is and I am NOT. He knows and i know that’s enough for me. Some things are just not worth my worrying to attempt to figure out. After all, “the secret things belong to YHWH our God” (Deut. 29:29).

Lean Into Paradox – We do not live in a dualistic world. We live in a world of paradox. Some things are true simultaneously. I have found that when I am being most dualistic in my thinking it is when I am in an argument where I am trying to win. It is easy to melt down the details of something into a simple binary when it benefits me. Isn’t this what the vast majority of politics are?Either/or thinking is often a technique used by the privileged and powerful to keep the teeter totter skewed in their favor. Both/and thinking is the technique used by the wise to keep things balanced and harmonious. Don’t let the cynics of this world tell you, “that’s just the way things are,” and be kept from seeing things from how they should and could be (and in one sense already are). We move toward balance, harmony, and integration to grow as people. We devolve toward tribalism, monopolies, and domination to die as people.

A few years ago I jotted down this little thought that ran through my head and it has stuck with me: “Jesus takes the either/or’s of the world and replaces them with the both/and’s of the gospel.” You know why this is true of Jesus and his gospel right? Because he was a sage. That is, a teacher of wisdom (think Proverbs, Ecclesiastics, etc.). The Biblical wisdom tradition teaches us to stop accepting the false dichotomies of the world and to embrace the inherent paradoxes of the universe God has created. Don’t get me (or the Biblical sages) wrong. Some things in life are either/or, but only some things. Every thing is not either/or. In fact, most things in life are both/and. Look at this seemingly contradictory parallel passage in Proverbs 26:4-5:

Do not answer fools according to their folly, or you will be a fool yourself.

Answer fools according to their folly, or they will be wise in their own eyes.

Is scripture from God or from humans? Yes.

Does God know what we will do in advance or do we have genuine free choice? Yes.

From Mary’s virgin pregnancy to a savior who is both fully God and fully Man Christianity is a faith built on the wisdom of paradox.

***[The lists below are constantly being updated. If you find some great resources don’t hesitate to reach out and let me know!]***

Here is a suggested book list that may get you started thinking about these things. Many of them were mentioned above. They are not the primary sources of the mystics as I gave in one of the steps above, but they are designed to help in other ways as more a general introduction and supplement to various aspects of mysticism.

Consider also these films and other videos:

Consider these suggestions and tips:

The Pastor’s Bookshelf: A Review

Dare to Lead: A Review