One of the most prominent words in the book of Leviticus – based on my word cloud I made and referenced in a previous post – is “Unclean.” 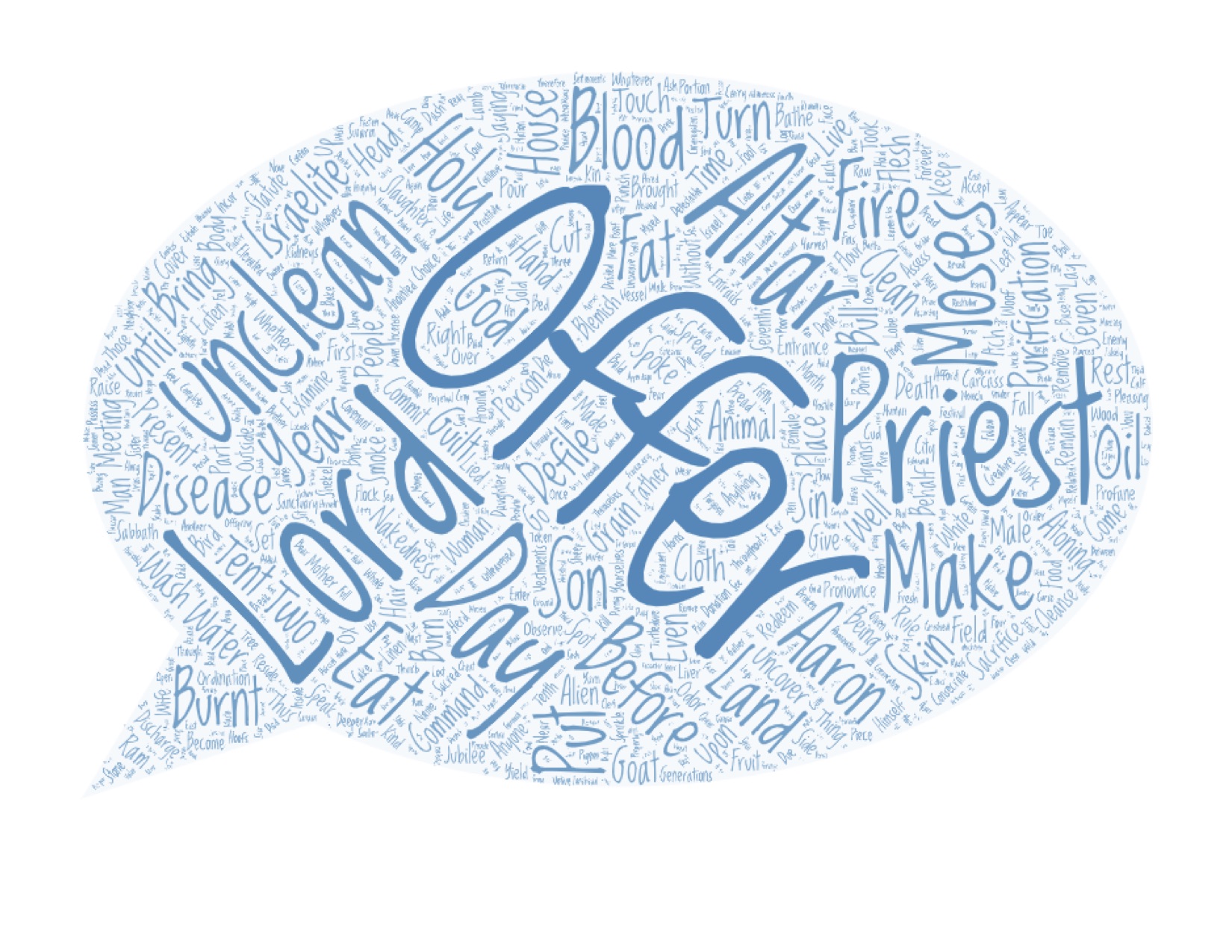 Almost all of the ritual instructions concerning impurity In the OT are found in Leviticus 11-15 [there are a few rules about defilement from corpses in Numbers 19]. Clean/unclean are terms that refer to the ritual standing of peoples, foods, and spaces. Holy/unholy are not perfectly synonymous with clean/unclean. The two sets of polarities often work closely together, but not always. Space and people could become contaminated and made unclean by coming into contact with something that was unclean. Food was primarily distinguished as clean or unclean to designate what could or could not be eaten.

Cleanliness was noncontagious, while uncleanness was generally contagious, but varied in stages of potency. Some uncleanlinesses were mild and not terribly communicable. This could leave one unclean for only a day. While others could contaminate severely leaving one unclean for longer periods of time. People with minor impurities could actually stay within the camp, but those with more severe impurities had to go outside the camp.

To be unclean was not necessarily also to be “unholy” or “sinful.” Most English Bible translations obscure this reality by translating the Hebrew hattat (Lev 12:6) as “sin offering.” This is unhelpful and misleading because “sin” makes one think there is a moral offense in play with the contamination. But that is not necessarily the case with hattat. A better, more accurate rendering would be “purification offering.”

The outline of Leviticus 11-15 is pretty straightforward:

The purpose of these instructions on things which are clean and unclean is to create boundaries for holiness, but the question that is much debated is what the reasoning behind the instructions are. What makes something (or someone) unclean?

The three most popular answers are:

Parts of any of these three answers are true, but none of them are sufficiently robust to encompass all of the instructions about cleanliness. Generally, some of the food instructions are about health, but if that were absolutely so why would our Lord declare all foods clean (Mark 7:14-20)? Some of the laws set barriers against pagan worship, but many did not. In fact, many of the laws are very similar to other laws in the ancient near east. And to say that the clean animals were all symbolic would be an odd argument for an ancient near eastern mindset.

The preeminent commentator on Leviticus, Jacob Milgrom, has proposed that the underlying justification for these instructions is a nexus of life and death. Death is the opposite of holiness which is life in its purest and most ecstatic state.  Thus, the strict rules against being around dead things. The skin diseases and other growths in a house or on materials are seen as sucking life from those things whether hurting and damaging the human or slowly deteriorating the materials of the house. The loss of semen and blood represent the loss of essential life-giving functions in the body. The animals that Israel were allowed to eat were primarily domesticated cattle, a little wild game, fish, birds, and locusts. In contrast to Mesopotamia and Egypt, hunting for sport did not happen very often in Israel the best we can tell archeologically and historically. Thus, there is a respect and reverence for life. Also, many of the prohibited animals were carnivores and thus seen as representative of death. The prohibitions against various mixtures such as sowing a field with two different kinds of seed or wearing a garment of two different materials had to do with wholeness and integrity – life as opposed to death, order as opposed to chaos.

God of Abundant Life, make us clean in the blood of your son. Make us clean – free from death and resurrect us into life, life, and more life. Amen.

A Bibliography of Cosmology and the Doctrine of Creation

A Journey of Re-Enchantment – Part 4