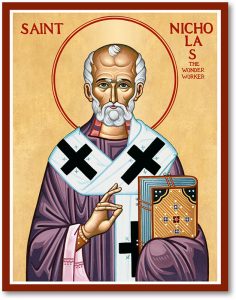 Here begins a new series on my blog. I make no promises about consistency or regularity with these posts. I will post as I feel interest and inspiration, but I will promise this: when I will post the items in this series it will be on a Saturday. Anything to keep that alliteration going! The preacher in me just can’t let a good opportunity for alliteration go to waste!

To explain the idea behind this project let me clarify some things. First, I am not going to focus exclusively on “Saints” from the Roman Catholic and Eastern Orthodox canons of sainthood. I will certainly include many of them because they are fascinating and important heroes of our faith, but I will also include others that I think are important heroes of our faith but not canonized by the Church as such. Second, I am thus using “saint” in a more generic sense of “hero.” Third, I will not be praying to the saints or anything like that, but I might offer a traditional Catholic prayer to a saint as an example of some aspect of that saint. Fourth, I will offer a prayer based on the given saint at the end of each entry as a way of asking God to stir in us the spirit of holy imagination so that we might also get into some holy mischief as his saints have always done to the glory of His name!

And for my inaugural post I thought I would describe one of the saints who has most interested me over time and is rather popular this time of year (sort of): St. Nicholas. Despite his reputation in Hollywood as a fat, red suit wearing, jolly man who helps sell stuff for Black Friday, there is an intriguing tradition behind the actual St. Nicholas.

St. Nicholas was born in Myra, Asia Minor in AD 270. he was a priest and bishop in Myra who was remembered as being particularly generous, joyful, and humble. He apparently became a priest at a very early age (though its uncertain how early exactly) and may have even participated in the council of Nicaea! [Some lists of participants at Nicaea include Nicholas and some do not.] His parents were apparently very wealthy and left him a large inheritance that he used to give generously to poor people. He was known for slipping coins into the shoes of homeless people [I’m not sure why they just left their shoes out enabling him to do this, but apparently that’s something they did back then!].

One of the most remembered legends about Nicholas is the legend of his generosity to a man with three daughters who fell on hard times. The daughters were left without a dowry (i.e. they were incapable of being married). They were desperate enough that they thought they would have to prostitute themselves to make ends meet. He didn’t want any glory for giving generously to them so he dropped money down their chimney anonymously three different times.

Of course through time some of the legends became more and more exaggerated and we eventually get some of the traditions that lead to the jolly ole’ Saint Nick we know of today. He was a beloved saint in Church history who may be the most depicted saint in the Catholic Church after Mary. The feast day associated with Nicholas is on December 6 because of his death on that day in AD 343. The feast was celebrated for a long time and often associated with gift giving. In Dutch speaking areas of Europe the legend grew of “Sinterklaas.” Children would leave out there shoes overnight and they would be filled with candy and small gifts by a redcoat, white bearded priestly man. Eventually as the legend spread it combined with the Yule traditions which involved a white bearded Oden who also distributed gifts.

The modern images of Santa Claus began in America and grew out of the traditions of the historical Saint Nicholas. The primary influences of the modern images of Santa Claus were from Washington Irving’s poem “A Visit from St. Nicholas” [More popularly known by its first line – “‘Twas the Night Before Christmas”] and a 1930s advertising campaign that gave us the image of Santa that most of us know today.

Father in heaven, thank you for the generous and joyful example set by your saint, Nicholas. As the world thinks of a commercialism version of your saint may we remember who he was as a faithful man of your Church. Make us like Nicholas – joyful, creative, and faithfully mischievous in our generosity. Amen.