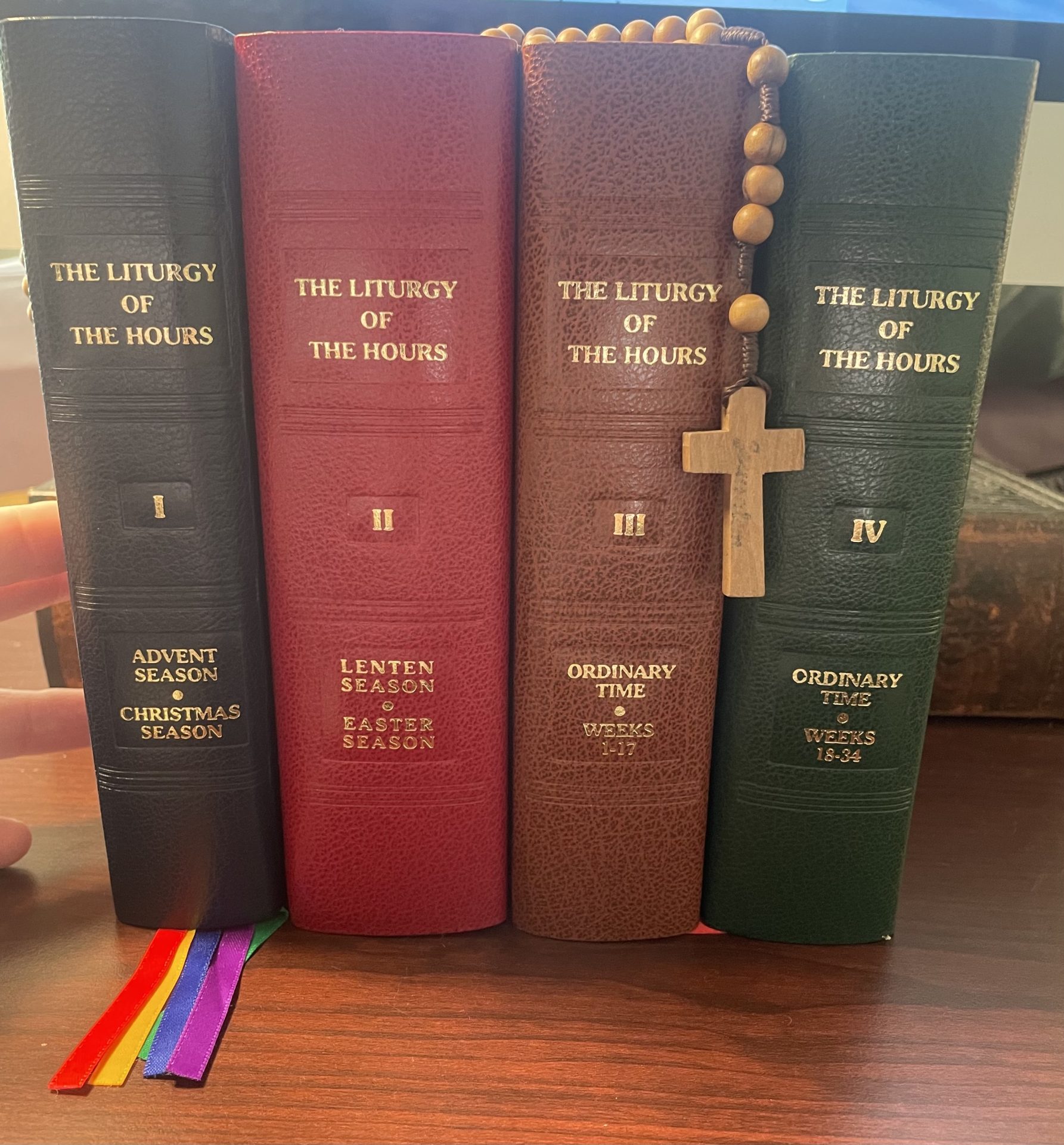 This is the first of (hopefully) many posts chronicling my journey to a re-enchanted faith. I have been on this journey for about a year now, but it still feels new and fragile. Thus, I have hesitated to write much about it in detail because I wanted to make sure I was doing it for me and not for something to write about on my blog. The seeds of this journey where first sown when I re-read some of Ruth Hailey Barton’s excellent book Strengthening the Soul of Your Leadership. Barton says your soul is a lot like your credit card: you don’t realize it’s missing until you need it and reach for it only to realize it’s not there. I went through an extremely difficult season of life starting in November of 2021 and Barton’s observation was true for me. I went reaching for my soul only to find it wasn’t there. I was dry in one way and drowning in another. I was broke and broken. My body was hurting. I was severely overweight and pre-diabetic. I was depressed and anxious in the extreme. We were in over our heads in credit card debt and more. I was fired (technically “let go” but you know how that goes in ministry!) from my first full-time preaching job. Oh, and we had a baby on the way.

In January of this year (2022) I started reading Richard Beck’s book Hunting Magic Eels: Recovering an Enchanted Faith in a Skeptical Age. At the time, I resonated with Beck’s story of feeling the Ache and deconstructing the fundamentalist faith of my upbringing. But at that time I couldn’t yet resonate with his story fo re-enchantment. I really wanted to, but I felt so dry that anything I did to try and re-enchant my faith felt fake and inauthentic. I knew so much – I was coming into the homeward stretch of finishing my Masters of Divinity – but I was feeling so little. Or was it that I was feeling too much to articulate with words?

I moved to Texas in January to begin working as the pastor at the Bastrop Church of Christ (BCoC). I didn’t realize it at the time, but that move was going to change my life forever. The thing you’ve got to understand about the BCoC is that they are NOT like your typical Church of Christ. They are fully-inclusive of women in service (egalitarian). And they are part of a group called “The Gathering.” The Gathering is a group of four churches (only three when I began!) from very different theological and denominational backgrounds who came together to share space and life in the name of Christ. We like to say we are “one church, many expressions.” These other churches are mostly of Charismatic varieties. Say what you will about some things in the Charismatic and Pentecostal movements, but one thing is for sure: those folk live in an enchanted world! For them, the world is alive with angels, demons, and God – especially the person of the Holy Spirit. To be thrown into the Charismatic world has forever changed me. My friends I’ve made there have often joked that I’m a “closeted Charismatic,” but suffice it to say I think I’m out of the closet on that one!!

I have also always loved the liturgical traditions of our faith. I have wanted to pray the liturgies and set hour prayers since high school. I purchased a volume called Common Prayer: A Liturgy for Ordinary Radicals that Shane Claiborne and co. created. I have found great joy in praying through other liturgical things over time – things like Every Moment Holy, Guerrillas of Grace and the 1662 Book of Common Prayer. As wonderful as those have been though, they were all still too Evangelical or protestant for me. I wanted something else. I saw on Richard Beck’s blog – Experimental Theology – that The Liturgy of the Hours – the Catholic liturgical prayer manuals – was one of the books he listed as most influential to his story of faith. I also remembered an excellent chapter in his book mentioned above about liturgical enchantments and the set hours of prayer in the year.

So I gave myself an early Christmas present and bought the four volume set of The Liturgy of the Hours. These are an intensive manual for prayer that in its fullest practice includes seven set hours of prayer throughout the day: 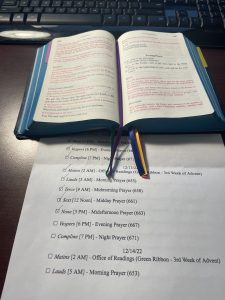 Partly for a sermon series I am doing in January on Leviticus and partly for my own journey of re-enchantment, I also decided that I would do 7 days of the full 7 hours of set prayers running from 12.12.22 through 12.18.22. Technically, under Vatican II a lay prayer of the Hours doesn’t have to pray so early in the morning, but I wanted to observe the more traditional hours of monastic life’s prayer rhythm.

I am currently on day 2. At the time of this writing I am between the prayer hours of none and vespers. I’ll be writing again soon to update how and what I am feeling through the whole experience, but for now I will just say, the early morning prayers are the hardest ones. The most difficult though is actually not what you might expect. You might expect the 2 AM prayer (Matins) to be the worst. It’s not. At least not for me so far. The worst one for me has been the 5 AM prayer (Lauds). It’s the worst one because between 2 AM and 5 AM you start to fall asleep again after being woken up and then are woken up again only three hours later! More to come soon.

A Journey of Re-Enchantment – Part 2